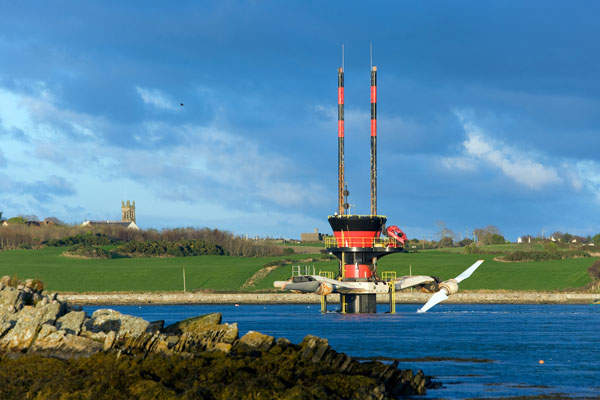 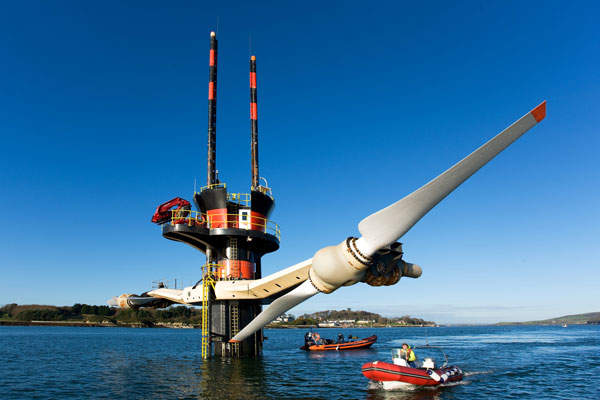 The SeaGen turbine consists of two 600kW axial-flow turbines each with a rotor diameter of 16m and weighing 27t. Image courtesy of www.siemens.com/press. 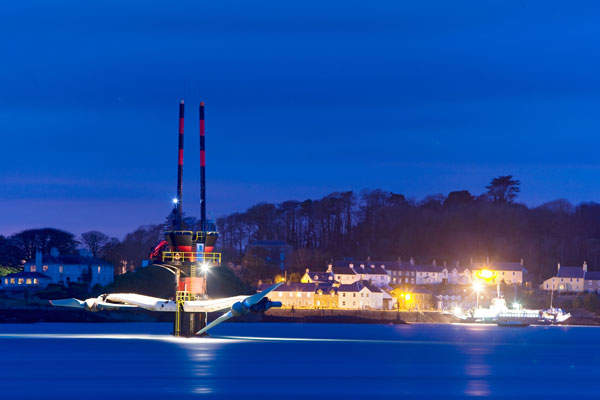 The tidal facility supplies electricity to 1,500 homes in Northern Ireland and the Republic of Ireland annually. Image courtesy of www.siemens.com/press.

The project involved installation of two 600kW turbines, which was completed in June 2008 and produced 150kW of electricity to the grid in July 2008. SeaGen generated electricity at its maximum capacity of 1.2MW for the first time in December 2008.

Another important milestone was reached in September 2012 with SeaGen producing 5GWh of tidal power since its commissioning, which is equivalent to the annual power consumption of 1,500 households.

Electricity generated by SeaGen was bought by ESB Independent Energy, a subsidiary of Ireland’s ESB, under a five-year Power Purchase Agreement (PPA) signed in March 2008. The renewable power is supplied to customers in Northern Ireland and the Republic of Ireland.

Green Ocean Energy, a marine energy company based in Scotland, is building a wave energy device called Wave Treader, which can be used to increase the energy yield from offshore wind farms.

The SeaGen turbine was designed by Peter Fraenkel, an engineer and co-founder of MCT. It works like an ‘underwater windmill’ where, instead of wind, the tidal currents drive the rotors. It consists of two axial-flow turbines supported on a mobile cross arm, which can be raised above sea level for maintenance purposes with the aid of a hydraulic lifting system.

Each turbine has a rotor diameter of 16m and weighs 27t; the structure weighs 1,000t and has a width of 43m from tip to tip. The cross arm is connected to a black and red steel pile structure at a distance of 9m above the sea level and the turbine rotors are approximately 3m below the surface of water during operation.

Electricity is generated by the twin rotors once the tide runs faster than 1m a second. At maximum speed, the tips of the blade rotate at 12m a second, one-third of the average wind turbine speed. The two rotating blades turn at 14rpm and drive the generator via a gear box system. The electricity produced is transmitted through a cable into the national grid across the Lough.

Construction of the Strangford Lough turbine

Components of SeaGen were manufactured across the UK and Europe. They were assembled and tested at Harland and Wolff’s shipyards in Belfast, the birthplace of the Titanic. A barge was used to transfer SeaGen from Belfast to the mouth of Strangford Lough for installation.

During installation, a work platform was mounted on the superstructure after the turbine structure was positioned on location. Then, four piles were drilled into the seabed using the QuadroPod as a guide and grouted to secure SeaGen in place.

A 450m-long duct was horizontally drilled 20m below the seabed. An 11kV power cable was passed through the duct to connect SeaGen to an existing onshore power substation located south of Strangford Lough. After completion of installation in June 2008, SeaGen underwent rigorous testing as part of the commissioning process until December 2008.

“It works like an ‘underwater windmill’ where, instead of wind, the tidal currents drive the rotors.”

Fugro Seacore was contracted to drill the foundation sockets for the installation of SeaGen. The company had previously drilled the foundation for MCT’s first turbine ‘SeaFlow’ off the north coast of Devon.

Belgian company Scaldis provided the crane barge Rambiz for transporting SeaGen from Belfast to Strangford Lough and for its installation on the seabed. MCT appointed environmental consultancy Royal Haskoning to carry out an Environmental Impact Assessment (EIA) of SeaGen after its installation. The grid connection work was undertaken by MCT in partnership with Northern Ireland Electricity.

The UK Department of Trade and Industry (DTI) partly funded the project. In addition, the project received £5.2m of funding from the UK Government and £500,000 from the Northern Ireland Electricity under the NIE Smart (Sustainable Management of Assets and Renewable Technologies) scheme. The scheme promotes the development of renewable power projects throughout Northern Ireland.

In 2011, the project qualified to benefit from the Marine Renewables Deployment Fund established by the Department of Energy and Climate Change after passing the UK Government’s operating performance criteria.

Environmental impact of the SeaGen technology

During the commissioning phase, the programme sent a marine mammal observer to closely monitor how the turbines of SeaGen interacted with the Lough’s marine life. SMRU also operated a sonar system to observe seal movements, which was partly financed by the nPower juice fund.

The project received full environmental clearance in January 2012 under the programme, after the report concluded that SeaGen had no major impact on the marine life in Strangford Lough.

Strangford Lough Tidal project as a prototype for future

SeaGen is the world’s first commercial tidal stream energy generator and is four times more powerful than MCT’s 300kW SeaFlow turbine that was installed off Lynmouth on the north Devon coast in 2003.

After the success of the Strangford Lough project, MCT planned to scale-up the SeaGen technology to build the 10MW Skerries Tidal Stream Array off the coast of Anglesey, North Wales. The array is a joint initiative by RWE nPower and MCT, and is set to begin commercial operation in 2015. It will supply clean electricity to up to 10,000 homes.