500kW to 700kW during prototype stage

The Wave Treader device can be attached to the base of wind turbines to generate wave energy. Image courtesy of Green Ocean Energy. 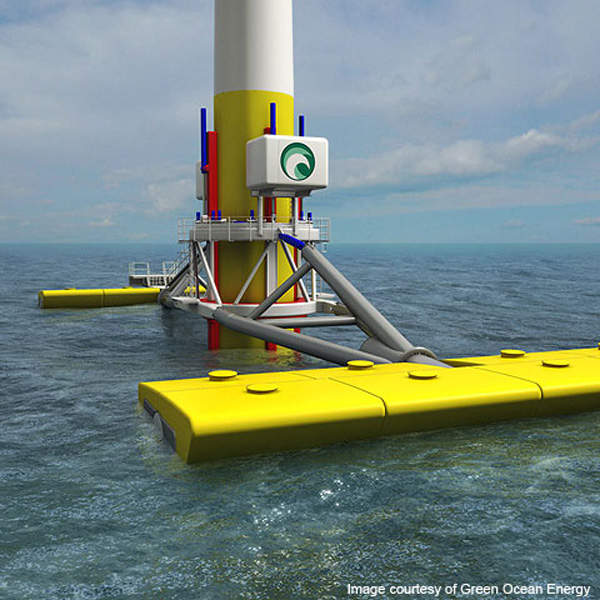 The Wave Treader consists of two arms and sponsons connected by an interface structure. Image courtesy of Green Ocean Energy.

Green Ocean Energy, a marine energy company based in Scotland, is building a wave energy device called Wave Treader, which can be used to increase the energy yield from offshore wind farms. It is in the process of obtaining a statement of feasibility for the device from the Norwegian foundation Det Norske Veritas (DNV).

The commercial potential of the wave energy device was already confirmed during a review by consultancy firm SgurrEnergy. The device is also planned to be certified in a four-step process. The first stage of certification is that of its design. It will be followed by the certification of the construction stage.

Green Ocean Energy is currently constructing a full-scale prototype of the device. The prototype will be trialled at a test centre in the UK. The device is planned to be installed at three offshore wind farms in the UK and Scottish territorial waters.

The prototype device will have a capacity of 500kW to 700kW, which will be sufficient to power more than 125 homes. The commercial version is likely to have a peak capacity of one megawatt.

Scotland and the UK have both set ambitious renewable energy targets for 2020. While Scotland is aiming for 50% renewable energy production by 2020, the UK as a whole plans to install about 8,000 offshore wind turbines between 2015 and 2023. These suggest a significant increase in offshore wind farms, which raises the potential for the Wave Treader.

Finances and backing from RWE npower and ITF in the prototype

Industry Technology Facilitator (ITF) has also supported the project by investing £25,000 ($39,164) in the early stages of the development of the device.

It is currently studying the commercial feasibility for the device to be used to provide power for offshore structures to which it is attached. ITF’s operating members GDF Suez, Tata Steel and Bosch Rexroth committed to invest £20,000 in the project.

The Wave Treader is the first project of its kind which ITF has invested in.

The Wave Treader does not require investment in infrastructure as the unique device shares the existing offshore wind farm infrastructure.

It is attached to an offshore wind turbine to produce wind as well as wave energy from a single installation. It can therefore improve the economics of wind installation by sharing the infrastructure costs. It doesn’t disturb the access to turbines in the event of maintenance. Technicians can easily access the turbines to carry out any repairs.

The device can be installed in new wind farms as well as retrofitted to the existing ones. It has a length of 50m and beam of 20m. It is made of floating bodies moulded of glass-reinforced plastic. It also has steel load-bearing members. It is made of off-the-shelf hydraulic and electrical equipment.

It uses modular design elements, which make it easier to change components. The reliability of the device is increased and the manufacturing costs reduced by adopting a simple design. The equipment used in the machine is duplicated in order to avoid interruptions in power production by minimising single point failures.

The current design gives the device an operational life of 25 years, assuming an overhaul for every five years. The design is patented in the US, while patents in other countries are yet to be received.

“Green Ocean Energy is currently constructing a full-scale prototype of the device.”

The forearm and sponsons are raised and lowered when the Treader is hit by a wave. This motion strikes the hydraulic cylinders, pressurising the hydraulic fluid inside the cylinders.

Fuel is smoothed by hydraulic accumulators and pumped to a hydraulic motor. The motor drives a generator to produce electricity. The process is repeated when the wave passes over the aft arm and the sponson in the reverse direction.

Generated wave power is transmitted with the help of the wind farm’s cable transmission system. The interface structure has vertical as well as rotary motion in the tidal range, which enables the sponsons to be aligned in the direction of the waves.