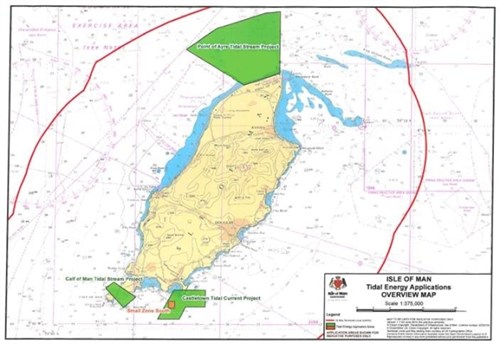 The Isle of Man government has selected preferred partners to develop a wind farm and tidal power within the 12-mile limit of its territorial sea.

Isle of Man Department of Infrastructure Minister Phil Gawne said: "Consultation will continue with all stakeholders potentially affected by the development of any offshore wind and tidal development in Isle of Man territorial sea to avoid any adverse impacts."

Isle of Man Economic Development Minister Laurence Skelly said: ‘The opportunities for the Isle of Man in renewable energy are significant. We estimate that leasing parts of the seabed within our waters to offshore wind and tidal developers will generate at least £5M of revenue per year directly to Government, helping to fund public services as well as contributing to a lower carbon footprint."

The proposed wind farm will be located on a site off the east coast of the Isle of Man.

Sites around the Point of Ayre, Calf of Man and Castletown will be surveyed for tidal power development, beginning 2015.

The government said any future lease would be conditional on the developers securing approval and consent via the process outlined in the guide to developers for planned works in the Isle of Man Territorial Sea. Sorry, there are no polls available at the moment.