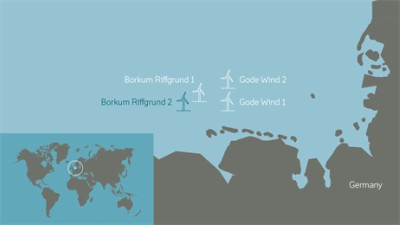 DONG Energy, a Danish energy company, will be building a new offshore wind farm at Borkum Riffgrund 2 in Germany.

The project is expected to be commissioned by first half in 2019.

By constructing the 450MW wind farm, the company’s offshore portfolio will reach 6.7GW, above its 2020 target of 6.5GW.

Annually, the offshore wind farm project will offer CO2-free power that will be enough to support approximately 460,000 in Germany.

DONG Energy executive vice-president and head of wind power Samuel Leupold said: "Offshore wind is a significant contribution to the German energy transition, and Borkum Riffgrund 2 confirms DONG Energy’s position as one of the major investors in the renewable energy infrastructure in Germany.

"The 8MW turbine takes offshore wind efficiency a further step forward, and the size of the Borkum Riffgrund 2 project is yet another indication of market maturity. We’ll continue our relentless efforts to drive down the cost of electricity from offshore wind."

In the initial stage, DONG Energy will take the complete ownership of Borkum Riffgrund 2, while at a later stage the company intends to divest up to 50% of the project.

"After completion of Borkum Riffgrund 2, DONG Energy will have installed approximately 1.35GW of offshore wind in German waters and supply power to 1.4 million households."