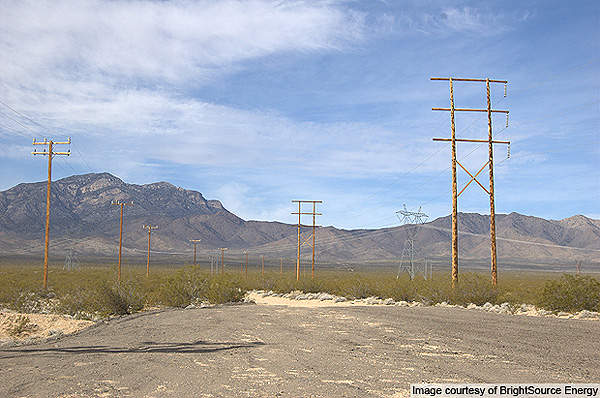 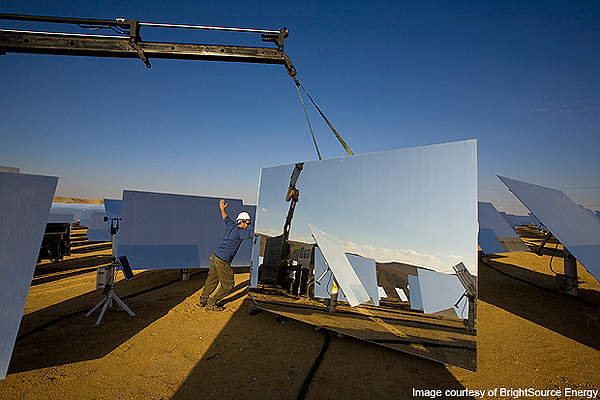 The heliostats for the concentrated solar power project were supplied by Guardian Industries. Image courtesy of BrightSource Energy. 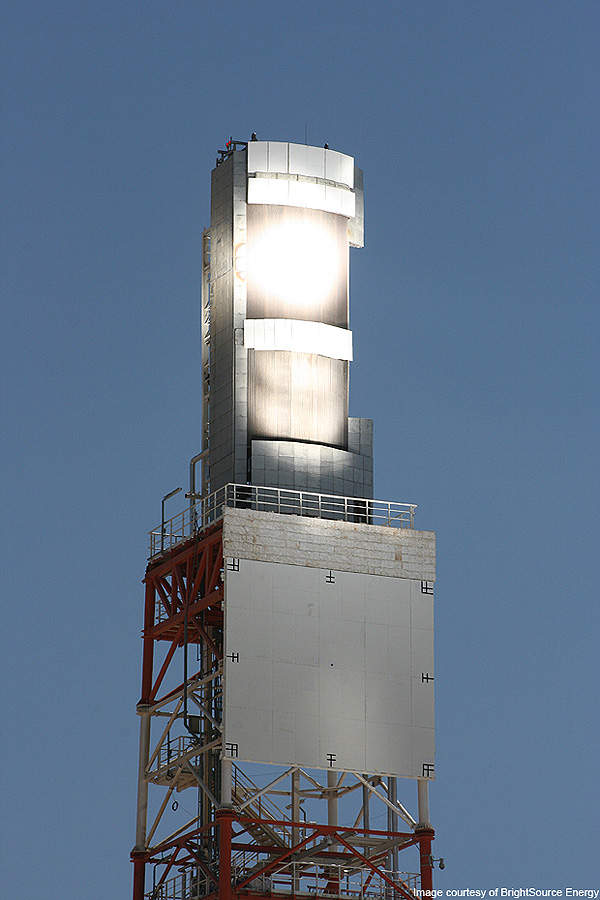 Each power tower of the three Ivanpah solar plant units has a boiler on top. Image courtesy of BrightSource Energy. 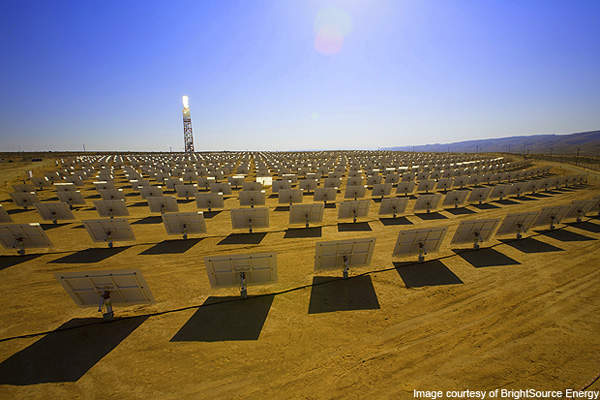 The heliostats are arranged in an arc around the tower. Image courtesy of BrightSource Energy.

Ivanpah Solar Electric Generating System (ISEGS), with a gross installed capacity of 392MW, is expected to be the largest solar power plant in the world when it becomes operational in 2013. Located in the Mojave Desert in San Bernardino County, north-west of Needles, it is the first large-scale solar thermal plant to be built in California in approximately two decades. It was named Energy Project of the Year 2012 by the USC CMAA Green Symposium.

"Alstom is providing $50m in equity funding. Other equity investors in the project include Silicon Valley Venture Capital, Morgan Stanley, BP and Chevron."

The concentrated solar plant is being built over an area of 3,600 acres of land managed by the Bureau of Land Management (BLM). It will power more than 140,000 homes. BrightSource Energy has signed power supply agreements with Southern California Edison and Pacific Gas and Electric (PG&E).

Ivanpah became controversial when more than the expected number of desert tortoises were identified at the site during construction. The US BLM consequently put a stop to construction in April 2011.

Construction was resumed in June 2011 after the BLM reviewed the project and concluded that the tortoises would not face significant threat because BrightSource had implemented a programme to protect the species.

The project will create 1,400 jobs during construction and 650 jobs per annum in the first three years of operation. It will result in $250m of construction wages and $650m of employee wages over its operational lifetime. In addition, it will result in $300m of tax revenues to the local and state governments.

The construction was 25% completed as of March 2012 and is on schedule for completion by 2013.

Finances for the renewable project from Google, Alstom and DOE

The project is being financed through debt and equity. Equity investors apart from BrightSource include Google and NRG Solar, who are financing $168m and $300m respectively.

Alstom is providing $50m in equity funding. Other equity investors in the project include Silicon Valley Venture Capital, Morgan Stanley, BP and Chevron. The California State Teachers’ Retirement System is also investing in the project.

The US Department of Energy (DOE) is providing a $1.6bn loan guarantee to the project.

The project is also backed by the US Government which has promised to provide tax credits equivalent to 30% of the project cost, under the American Recovery and Reinvestment Act (ARRA).

Structure of the Ivanpah solar power facility and heliostat details

The Ivanpah solar complex consists of three plants – Ivanpah 1, 2 and 3, which will run at 126MW, 133MW and 133MW capacities respectively. Each plant will have a 225m tall boiler tower which receives the radiation that will be focused by heliostat mirrors. The complex will have 173,500 heliostats with a total of 347,000 mirrors.

"It was named Energy Project of the Year 2012 by the USC CMAA Green Symposium."

Each heliostat will comprise of two glass mirrors, a support structure, pylon and a software-based tracking system. The heliostats will be asymmetrically arranged in an arc fashion around each tower.

A natural gas-fired start-up boiler will provide the required heat for the plant start-up. Natural gas will be supplied by a gas plant located adjacent to the site.

Each plant will have a steam turbine generator at the base of the tower to produce electricity using the steam generated by the boiler.

Air-cooled condensers will be used to cool the towers in order to minimise the usage of water.

Two wells dug to the east of Ivanpah 2 will supply the required water to the complex. A small onsite waste water treatment plant will also be built. Wastewater will be recycled for zero water discharge.

The boiler towers at the solar plant will use BrightSource’s Luz Power Tower technology (LPT). Heliostat mirrors fixed on the boilers on top of the towers receive the reflection of the sunlight from those at the bottom of the tower.

This creates high temperature in the boiler, which heats up the water inside the boiler to generate steam of up to 550 degrees centigrade. The steam will be transferred through pipes to the turbine chamber to drive the turbine blades and to produce electricity.

The dry-cooling technology used at the plant reduces the water needed for cooling by 90%. It is estimated that the plant will require just five percent of the water used in conventional solar thermal technologies.

Grid Connections for Ivanpah 1, 2 and 3 and environmental impacts

The three Ivanpah solar plants will be connected to a new substation (to be built), from where the power will be transmitted to the California Power Grid through the Southern California Edison 115kV system.

The project will reduce carbon emissions to the extent of 400,000t a year. It will also complement the state of California’s target of achieving 33% renewable energy by 2020.

The possible harm to the desert tortoises at the project site will be mitigated by acquiring a 7,300 acre land, to where the species will be migrated after onsite disease testing.

Bechtel is the engineering, procurement and construction contractor for the project. WorleyParsons provided engineering support services to BrightSource, including those for the certification process, conceptual design of the transmission lines, drainage systems and developing a turnkey approach for the construction.

The supply contract for solar boilers was awarded to Riley Power. The heliostat mirrors are being supplied by Guardian Industries.