The wood received at the facility is chipped before being fed in to the combustion chamber. Image courtesy of Burmeister & Wain Scandinavian Contractor A/S. 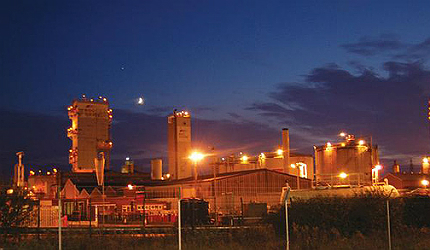 Western Log Group built the plant over a six-acre site, in a joint venture with Eco2. The plant cost £33m to construct. It is owned by Western Bioenergy, a consortium of Good Energies and Western Log Group.

The South Wales Forestry Commission supplies approximately 160,000t of wood to the plant every year. The plant burns the wood to produce about 14MWe per annum, which is enough to power 31,000 homes.

It saves 47,000t of carbon dioxide emissions a year, which will help the Welsh Assembly meet its target of reducing greenhouse emissions by 34% by 2020. Scottish Power has signed an agreement with the developers to offtake the power produced by the plant.

Financial support from the EU, Bank of Tokyo and others

Good Energies, a company which invests globally in renewable projects, provided major financing for the project. A loan was also availed from the Bank of Tokyo-Mitsubishi and a consortium of other banks.

In addition, the project received £9.6m ($14.7m) of build grant from the EU’s Objective 1 programme and £4.65m ($7.1m) from the Bioenergy Capital Grant scheme of the Wales Department of Trade and Industry (DTI). Englefield Renewable Energy provided equity funding for the project.

“Western Log Group built the plant over a six-acre site, in a joint venture with Eco2. The plant cost £33m to construct.”

Planning permission for the plant was obtained in April 2004. In the same month a consortium of Aalborg Energie Technik (AET) and Burmeister & Wain Scandinavian Contractor (BWSC) was awarded the turnkey construction contract for the plant.

The plant’s construction began in October 2006 and was completed in about two years, with the help of local subcontractors. The project created 200 construction jobs and 20 operational and administrative jobs.

Margam is proximate to the local industrial area and has a motorway nearby, which makes the delivery of wood and grid connections easier. Grid connectivity was provided by Western Power, an electricity distribution network operator for South Wales.

The combustion chamber comprises of a single-drum boiler of AET-M-1050 make and a bag-house. The boiler is integrated with a firing system with an advanced grate and low-NOx system. It has a natural circulation with a thermal input of 47.5MW. It burns about 20t of chips an hour.

The advanced spreader-stoker travelling grate in the firing system ensures complete burnout of the wood to minimise the formation of nitrous oxide (NOx). The dust and other particles present in the combustion gases are removed by a bag filter in the bag-house.

Generating power from wood chips at the Welsh facility

Clean, round pieces of wood which arrive at the site are stored and chipped into small pieces. Wood chips are blended and fed as fuel to the boiler to produce heat. The combustion chamber heats up water to about 512°C to convert it to superheated steam at 92bar.

High-pressure steam is passed on to the turbine chamber to drive a two-shaft steam turbine to generate electricity. The air-cooled condenser cools the steam emanating from the turbine room into water, which can be fed back to the boiler through the condensate system.

Contractors and suppliers for the UK’s sustainable biomass plant

Gifford, an engineering company based in the UK, provided site management services during the plant’s construction. The consultant was joined by a representative from AET.

“It saves 47,000t of carbon dioxide emissions a year, which will help the Welsh Assembly meet its target of reducing greenhouse emissions by 34% by 2020.”

The scope of work for Gifford included monitoring the construction progress, interfacing and reporting issues if any, conducting site meetings, certifying the monthly accounts and more besides.

As the turnkey supplier, AET was responsible for design, supply, construction and commissioning the entire plant equipment.

The company was also responsible for stack piping and ducting, insulation, structural steel, galleries and stairs. The steam turbine was supplied by Mitsui Engineering & Shipbuilding. The condenser was supplied by GEA.