The RITE project in the East River in New York consists of 30 Generation 5 free flow turbines in the pilot phase. Image courtesy of Verdant Power Inc.

The first turbine of the tidal project was installed in December 2006. Image courtesy of Kris Unger / Verdant Power Inc.

Each turbine is fixed over a pile top mount that is supported by a monopile foundation. Image courtesy of Kris Unger / Verdant Power Inc. 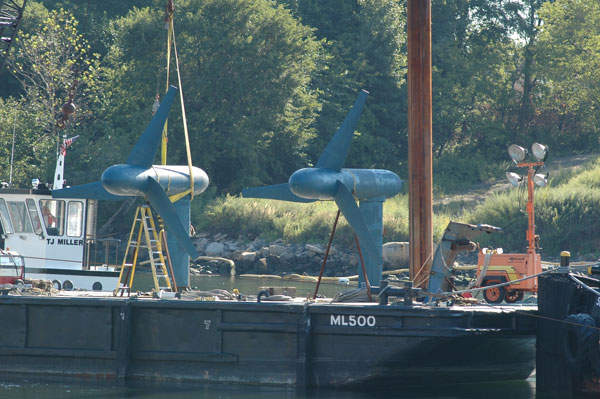 Two turbines will be installed initially, with the remaining in phases. Image courtesy of Christopher R. Gray / Verdant Power Inc. 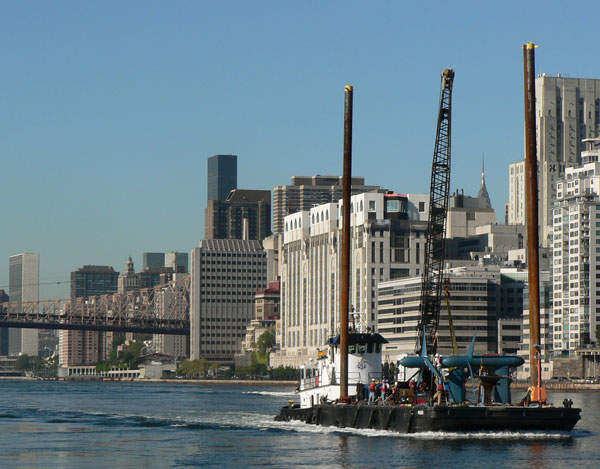 The phase two demonstration of the RITE project was completed in 2009. Image courtesy of Verdant Power Inc.

US-based renewable energy company Verdant Power launched the Roosevelt Island Tidal Energy (RITE) project in 2002. The wave power project is being developed in the East Channel of the East River in New York, US. It includes a one megawatt pilot wave power generation system.

The pilot project received a ten-year commercial licence from the Federal Energy Regulatory Commission (FERC) in January 2012. It is the first such project in the US to receive the FERC licence.

The pilot production facility is expected to be completed in 2014. It will then have the world’s first grid-connected array of tidal turbines. It will produce 2.4GWh of power each year.

New York has good sources for generating tidal power, such as the East River, the St. Lawrence and Niagara rivers. The state has potential to produce an estimated 500MW to 1,000MW of tidal power.

The RITE project is being developed in three phases. Prototype testing was carried out during 2002-2006 as part of phase one. The successful test results of the prototype enabled Verdant to gain permits for the phase two demonstration, from the FERC.

Phase two demonstrations were carried out during 2006-2009. It involved installation of six turbines, with each turbine fixed over a pile top mount which is supported by a monopile foundation. The foundation consisted of six monopiles. A spacing of 100ft was maintained between the turbines.

All the turbines except one carried 35kW induction generators. The tidal power produced by this demonstration phase was supplied to the Gristedes supermarket and the Roosevelt Island Operating Corporation’s parking facility.

The second phase demonstrated a turbine peak efficiency of 38% to 44% in water current speeds of 1.8kts to 4.2kts. The phase produced 50MWh of electricity by October 2008 and its results were used to meliorate the turbine design.

Verdant Power is currently carrying out the third phase of the project, which involves a commercial pilot scale build-out using the improved turbine. The commercial scale plant requires 21.6 acres (8.74ha) of area. Its operations will be monitored remotely.

The pilot wave power facility will consist of 30 Generation 5 turbines. The electricity generated by these 35kW free flow system turbines will be transferred to the shore by 480v underwater cables connected to five switchgear vaults.

The operational control is carried out through the switchgear on the shoreline connected to an onshore control room. The installation of the turbines will take place in a phased manner, with two turbines installed initially.

The RITE project makes use of free flow kinetic hydropower system (KHPS) developed by Verdant Power. The KHPS consists of horizontal-axis turbines with three-bladed rotors, which convert the kinetic energy of the river currents into electrical energy.

"New York has good sources for generating tidal power, such as the East River, the St. Lawrence and Niagara rivers."

Installed completely underwater, the system produces electricity from the river currents without disturbing the natural flow of the water.

The turbine blades rotate at a constant speed of 40rpm because of the river currents. The speed of the turbine is boosted by an accelerator connected to the induction generator. The generator is enclosed in a waterproof nacelle which is mounted on a pylon. The nacelle also contains a gearbox. Stainless steel and reinforced plastic are used for the turbine and other systems. The systems are coated with high performance anti-corrosion materials.

Silent operations and invisibility from the shore reduce the system’s impact on the surrounding environment. The modular design and small size of the system make it easy to install and also cost effective.

The system can be scaled to any size to suit villages, cities or deep sea areas. It does not require any transmission lines and is suitable for installation even in populated areas. It can also be integrated into water purification systems to generate power using the water flow and therefore reduce the operational cost.

The contractors for the RITE project include Devine Tarbell & Associates as the lead consultant and BioSonics for environmental impact assessment.