The Middelgrunden offshore wind farm is located off the coast of Copenhagen in Denmark. Image courtesy of Siemens, Press Picture.

PERI supplied the formwork sets for the foundations of the wind farm. Image courtesy of Siemens, Press Picture 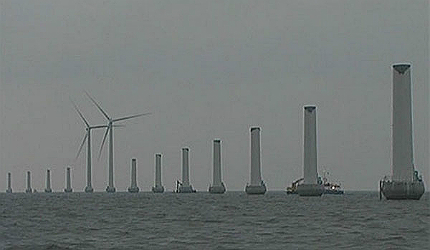 Middelgrunden was celebrated as the world’s largest offshore wind farm when it was opened in 2001. Located 3.5km offshore of the Danish coast, the wind farm produces up to 85,000MWh of power annually, which makes up about three percent of Copenhagen’s total power consumption.

The wind farm consists of 20 turbines, which are equally shared by its developers Københavns Energi and Middelgrundens Vindmøllelaug, a private cooperative partnership. Its operations are managed by the SEAS Wind Energy Centre on behalf of the owners. The two partners invested a total of $60m in the wind farm.

Location and layout of the Danish offshore wind farm

"The wind farm consists of 20 turbines, which are equally shared by its developers Københavns Energi and Middelgrundens Vindmøllelaug."

The wind farm was built in a location which was previously used as a dumping area for building materials. The water depth at the location varies from two metres to six metres.

The turbines are rated at two megawatts each and are installed in a curvilinear array with a spacing of 180m between the turbines. The array is 3.4km long in the sea and occupies one hectare.

The turbines are protected against corrosion using a high-grade corrosion resistant external paint. They also feature internal climate control and built-in service cranes. These hydraulic cranes, mounted on the nacelle, enable easy servicing of the turbines.

The turbine towers were placed over gravitation foundations. The towers are about 64m high. The rotor diameter is 76m.

The paint system fulfils the standards required for North Sea offshore structures. The blades are made of fibreglass, and hence they are corrosion-free.

History of the renewable energy project

The proposal for the Middelgrunden wind farm was submitted in 1996. A feasibility study was conducted on the project using the financial grant by the Danish Energy Agency. After a series of public hearings from 1997 through to 1999, the project was given the final go ahead permission in 1999.

Construction of Middelgrunden in Oresund

The construction on the Middelgrunden wind farm began in 2000 and was completed by the end of that year.

The foundations for the wind farm were precast in Burmeister & Wain’s dry dock in Copenhagen. A crane was built specially to lift the foundations from the dock.

The foundations are capped against ice. These reinforcement caps were cast using two formwork sets supplied by PERI. These sets with 11 segments helped to cast foundation caps and shaft units with uniform dimensions. The number of units could be varied according to the shaft height.

The turbine components were assembled in the harbour and shipped to the site by means of a barge. They were installed in place by using an 80m crane from a jack-up platform.

Power produced by the turbines is first routed to a central turbine, the tenth turbine, which in turn transmits it to the Amager power station on the eastern coast of Amager via a 30kV subsea cable.

The turbines feature an automatic greasing / lubrication system which lubricates the bearings to reduce the need for servicing. The oil used for lubrication is ensured to be clean by fitting a special gearbox oil filter to the turbine. The temperature of the oil is maintained within the limit with the help of a cooling and heating system.

"The foundations for the wind farm were precast in Burmeister & Wain’s dry dock in Copenhagen. A crane was built specially to lift the foundations."

The air cooling system in the turbine consists of heat exchangers that recycle the air used to cool the components, such as gears and generators. This greatly reduces the amount of external air for cooling, which reduces corrosion inside the turbine.

Corrosion in the interiors of the turbine is also minimised by the de-humidifying devices equipped in the tower and nacelle room. Standby heaters are also installed to prevent corrosion of the main electric components due to condensation.

Communication to and from the turbine is enabled by an internet-connected computer installed in each turbine. Each turbine has a unique email address, which helps maintenance or repair personnel to communicate with other people and suppliers of the components.

The computers are also connected to the wind turbine control system.

The turbines for the wind farm were supplied by Bonus Energy, which is now part of Siemens. The foundations for the turbines were built by Monberg & Thorsen. They were supplied and installed at the offshore site by MT Højgaard. NKT Cables supplied the subsea cables.