The 800MW CPV Sentinel (CPVS) natural gas power plant is spread over an area of 37 acres in the Riverside County, California, US. Copyright Gemmapower.

The CPVS energy project will complement other renewable energy plants when there is a peak electricity demand in the region. Copyright Gemmapower.

The project is expected to be completed by July 2013. Copyright Gemmapower. 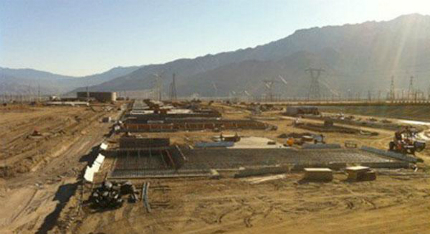 The CPV Sentinel (CPVS) energy project is an 800MW natural gas power plant under development in Riverside County, California, US. The area footprint of the CPVS plant is 37 acres. Construction work on the project started in July 2011 and its completion is expected in July 2013.

The $900m project has been designed to provide a secure source of renewable energy. It will operate only to complement other renewable energy plants when there is a peak demand in electricity in the region.

It will have the potential to protect some 640,000 homes in Coachella Valley and Los Angeles Basin from power blackouts.

The CPVS energy project is co-owned by Competitive Power Ventures (CPV-25%), GE Financial Services (25%) and Diamond Generating Corporation (DGC-50%). CPV is the manager and developer of the project while DGC will be the plant operator.

Its operational life is 30 years and the electricity produced by the project will be purchased by Southern California Edison (SCE) under a long-term agreement with CPV.

"Each CTG can start in ten minutes and operate at 43% in simple cycle mode."

The CPV Sentinel plant will be installed with eight natural gas-fired LMS100 combustion turbine generators (CTGs). Each CTG features an exhaust stack 13.5ft in diameter and 90ft in height. The plant will also be equipped with selective catalytic reduction (SCR) and carbon monoxide (CO) equipment, as wel as a zero liquid discharge system.

Each CTG can start in ten minutes and operate at 43% in simple cycle mode. It will help the plant meet environmental challenges while contributing to reduction of carbon dioxide emissions. The plant’s liquid wastewater will be removed with the use of zero liquid discharge system.

Other facilities of the project comprise of a 3,200ft-long potable water supply line, a 0.75 acre stormwater retention basin and five onsite water supply wells. A 2.6-mile-long natural gas pipeline will supply natural gas to the plant from the existing Indigo Energy Facility.

The CPVS plant will feed the electricity generated into the SCE Devers substation via a 3,250ft-long transmission line.

GE Energy is supplying the LMS100 gas turbines for the plant.

An engineering, procurement and construction (EPC) contract worth $250m was awarded to Gemma Power Systems, a wholly-owned subsidiary of Argan, to design, build and provide other related services for the project.

Credit facilities worth $800m for construction of the facility are being provided by a group of 23 banks led by Bank of Tokyo Mitsubishi UFJ, Royal Bank of Scotland, ING, Natixis and Sumitomo Mitsui Banking. It includes a $635m construction loan for a period of ten years and a letter of credit for $160m. The project has also received $2bn of commitments from lenders.

The local environmental impact of the power plant has been assessed to be significantly less. The location, design and mitigation measures taken by the project ensure minimum environmental consequences.

Measures have been also been taken to reduce any impact from construction by limiting emissions and dust generation. More importantly, the plant will be equipped with pollution control mechanism to reduce emissions from CTGs.

"The amount of renewable generation of all electricity produced in the state stood at 14%."

As of May 2011, the amount of renewable generation (wind, solar, geothermal, biomass and small hydroelectric facilities) of all electricity produced in the state stood at 14%.

The renewable power market of California has witnessed steady growth ever since the state adopted Renewable Portfolio Standards in 2002, which required 20% of total electricity production of the state from renewable sources by 2017.

Once complete, CPVS will provide competitively priced electricity for sale to utilities.

The plant will especially deal with the growing demand for electricity in the western Riverside County and the Coachella Valley of Southern California.