The Blue Mountain (Faulkner I) geothermal power plant in Humboldt County, Nevada, US, is owned by EIG Global Energy Partners.

The Faulkner 1 has three energy converters supplied by Ormat. 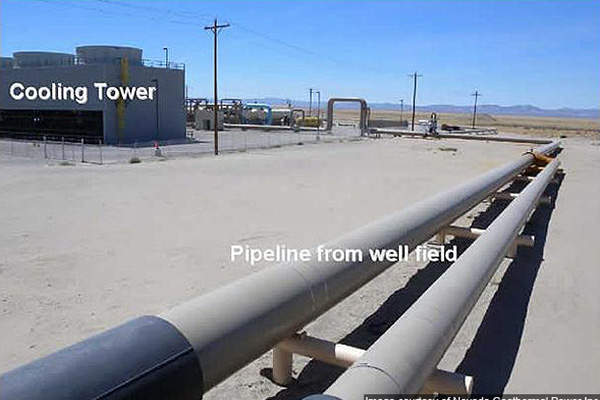 A close view of the pipeline between the well and the plant. 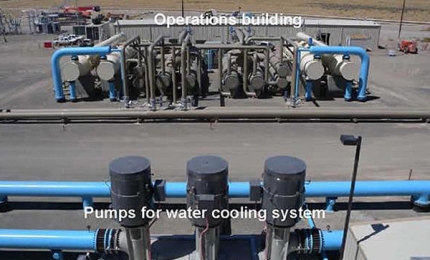 The Blue Mountain geothermal power station, also known as Faulkner I, is situated in Humboldt County, Nevada, US. Commissioned in October 2009, it was developed by Nevada Geothermal Power (NGP) and later sold to EIG Global Energy Partners (EIG) in April 2013. The plant was operated under a leasehold agreement by Nevada Geothermal Operating Company, a subsidiary of Alternative Earth Resources until January 2014.

The 49.5MW first unit of the plant was constructed at a cost of approximately $180m and its initial output was 38MW. An optimisation programme began in 2010 increased its gross output to 48MW by February 2011, whereas the plant has a resource potential of 100MW.

A 20-year power purchase agreement was signed with NV Energy to supply all the electricity generated at Faulkner I.

Ormat Technologies was awarded a $76m engineering, procurement and construction (EPC) contract for Faulkner I in 2008. Ensign Drilling was contracted in November 2009 for drilling two deep injector wells and one production well, as part of the optimisation programme.

Location of the geothermal power plant

The Faulkner I site occupies an area of 11,120 acres and is located 33km away from the state transmission grid. Approximately 12% of the total area of the site has been developed so far.

The plant constitutes three 16.5MW energy converters from Ormat, six geothermal wells, and fluid collection and injection facilities. It is also equipped with a water cooling tower, a control building, as well as fire protection and safety systems.

"An optimisation programme began in 2010 increased its gross output to 48MW by February 2011, whereas the plant has a resource potential of 100MW."

The form of fluid motion between the injection and production wells was ascertained by conducting reservoir studies on the wells in 2013. The optimisation scheme implemented in the project depends on the production content of the existing injection wells.

The insulated pipelines link four injection wells at the western side of the site. The wells will increase the production capacity of the plant when they are turned into high temperature production wells with the temperatures between 180ºC and 200ºC.

Wells 57-15, 58-11 and 91-15 at the north and west to the production area were injected with fluids for increasing output. The injection capacity of each well is more than 2,000gal a minute.

Three injection test wells were drilled to the south of the production fields in early 2011. The data gathered from the long-term injection tests on the new and completed wells is used to project the reservoir production for ultimately determining the future sustainable production levels of the plant.

The Blue Mountain geothermal power project employs is a binary cycle power plant incorporating a closed-loop heat exchange system, in which hot water or the primary fluid sourced from 4,000ft-8,000ft deep wells inside the earth is used to heat a secondary fluid with a low boiling point.

The Raft River geothermal project is located in Cassia County, Idaho, US, approximately 320km south-east of the state capital of Boise.

The secondary fluid in the heat exchanger evaporates as it is heated up by the primary fluid and the vapour spins the turbine to generate electricity.

The thermodynamic process of Organic Rankine Cycle uses organic fluid containing a lower boiling point than water. The fluid is exposed to heat for producing vapour, which is used to rotate the turbine or generator to produce electricity.

The power produced by Faulkner I is fed to the national grid through a 33km-long, 125MW transmission line owned by NGP.

Insurance company John Hancock issued a senior debt loan to fund the $8.4m optimisation programme. Guaranteed by the US Department of Energy, the loan was sanctioned under the Financial Institutions Partnership Program (FIPP). John Hancock also issued a $95m loan for the construction of the power plant.

Blue Mountain Faulkner I is the first geothermal power plant to obtain an Investment Tax Credit (ITC) grant of $57.9m from the US Department of Treasury.