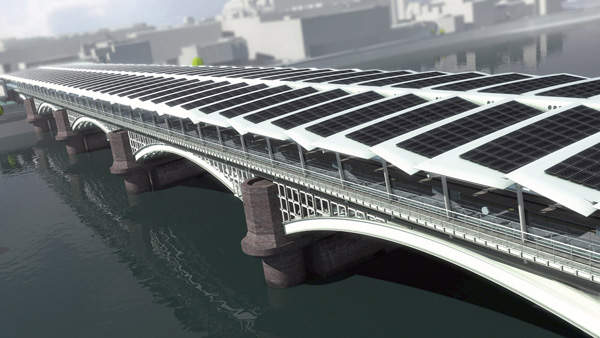 The Blackfriars Solar Bridge on the River Thames will be the world's largest solar bridge. Image courtesy of solarcentury.co.uk and networkrail.co.uk. 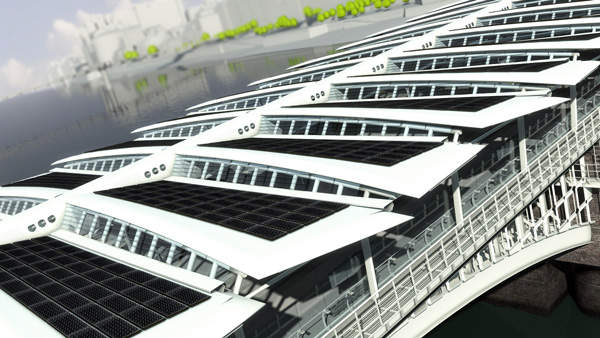 The first solar panel being fixed on to the bridge’s roof. Image courtesy of solarcentury.co.uk and networkrail.co.uk.

Construction on the Blackfriars solar bridge is expected to be completed in 2012. Image courtesy of Network Rail. 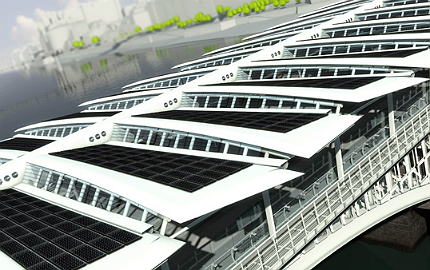 The Victorian-era Blackfriars Bridge over the River Thames is being upgraded with a solar roof, the second of its kind in the world. Network Rail is upgrading the bridge as part of the Thameslink Programme which includes construction of a new station across the river at Blackfriars, upgrading of the rail bridge and construction of a new London Underground railway station.

"The UK is one of the top ten solar power markets in the world, with 759MW of installed solar power capacity."

Blackfriars solar bridge will be the largest solar bridge in the world when it opens in 2012. Its construction commenced in October 2011. It will be larger than the world’s first solar bridge, the Kurilpa Bridge located in Brisbane, Australia.

The solar roof of the bridge will consist of 4,400 photovoltaic panels forming the largest solar array in London.

The station itself is being redeveloped with new facilities on the upgraded solar rail bridge. The station became the first to span the entire River Thames when two entrances of the station on the south and north banks of the river were opened in December 2011.

First Capital Connect will be able to run longer trains of up to 12 carriages along the Thameslink route once the upgraded bridge is opened.

The solar bridge upgrade project has been undertaken in order to increase the bridge’s capacity to cater to the increased passenger and rail traffic. The bridge will have a roof with 6,000 square metres of solar modules supplied by Sanyo Electric.

The solar array will generate 900,000kWh of power every year, which will be used entirely by the Blackfriars station.

Funds from the Department for Transport and other key players

The Department for Transport funded the solar panels for the bridge from its safety and environment fund.

Solar Century is responsible for the engineering and installation of the solar system on the bridge. Jacobs Engineering has provided the design of the solar panel array.

HIT module technology and use of anti-reflective glass mirrors

The Heterojunction with Intrinsic Thin layer (HIT) type solar modules contain a thin mono-crystalline silicon wafer in the middle of ultra-thin silicon layers. Modules are noise-free because they do not contain any moving parts.

Each module is 1.58m high and 0.8m wide. They occupy less space compared to conventional crystalline silicon cells. The weight of each module is 15kg.

Anti-reflective glass mirrors on the modules control the scattering of sunlight improving the power generation in the morning and evening.

Blackfriars solar bridge will create a positive environmental impact thanks to its sustainability features. The bridge will supply 50% of the power consumed by the Blackfriars station, therefore reducing the carbon dioxide emissions from the station by about 511t per annum. These savings are calculated based on standard emission of 0.545kg CO2 per kWh of grid electricity in the UK.

Solar pipes of the bridge will pass on natural sunlight to the station to reduce the power consumption for artificial lighting during day time. In addition, the bridge will have rain water harvesting systems.

The UK is one of the top ten solar power markets in the world, with 759MW of installed solar power capacity. The country has set a renewable energy production target of 15% by the year 2020.

"Blackfriars solar bridge will create a positive environmental impact thanks to its sustainability features."

In its effort to meet this target, the government announced a feed-in-tariff (FiT) on renewable energy generated by households and businesses in 2010.

The initiative resulted in a 60% increase in the production of solar electricity in the year, which made the UK the fastest growing solar power market in the world.

The incentive for solar photovoltaic systems was, however, reduced by half in 2011, which invited strong opposition from the solar power industry.