The Belo Monte hydropower plant on the Xingu River in Brazil will be the world’s third largest hydropower project.

Environmentalists fear that the Belo Monte project will harm the Amazon. Image courtesy of Earth Observatory.

Alstom will supply seven Francis turbines to the power plant. 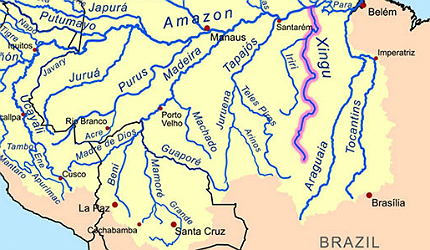 The 11,233MW Belo Monte hydroelectric power plant, located in the state of Pará, is a hydropower project that will help Brazil meet its increasing energy needs. The project will produce hydropower from the Xingu River waters.

It will serve approximately 35 million people upon its completion in 2019. It is also expected to become the world’s third largest hydropower project.

Construction on the project began in March 2011 and will be fully completed in eight years. The plant will, however, produce first power as early as 2014.

"Brazil expects a 4.1% annual growth in its energy demand during the next two decades."

Plans to build a hydropower plant on the Xingu River were proposed in 1975. However, they were withdrawn in the 1990s having faced strong opposition from environmental activists and local residents.

The plan was later modified to result in less damage being done to the environment and the local residents, by incorporating mitigation measures.

The project received environmental clearance from the Brazilian Government in February 2010. The Norte Energia consortium was awarded the construction contract in August 2010.

The main power house of the plant will be located at Belo Monte and will consist of 18 Francis turbines, rated at 624MW each. The main spillway will be built at Pimentel Island. A supplemental spillway in Bela Vista and a supplemental powerhouse at Pimentel will also be built as part of the project.

The supplemental powerhouse will consist of nine bulb turbines rated at 25.9MW each, making up a total capacity of 233.1MW.

The main powerhouse, the spillway and the supplemental powerhouse are strategically placed at different locations in order to minimise the area flooded by the dam’s construction.

The electricity generated by the Belo Monte hydroelectric plant will be transmitted to the National Interconnected System (SIN) through the Tucuruí-Macapá-Manaus transmission line, from where it will be distributed to consumers.

A consortium of Alstom, Voith and Andritz will supply the equipment required for the plant.

"The project received environmental clearance from the Brazilian Government in February 2010. The Norte Energia consortium was awarded the construction contract in August 2010."

Alstom will supply seven Francis turbines, hydro-mechanical equipment and related Gas Insulated Substations (GIS) for the plant as part of a $684m contract signed in February 2011.

IMPSA won a contract worth $450m in February 2011 for the supply and installation of four 624MW Francis turbines and generators. The contractual scope also includes the supply, installation and commissioning of the penstocks and lifting equipment.

Arcadis Logos was awarded a $146m contract by Norte Energia in April 2012 to serve as the owner’s engineer for the project.

Despite being hailed as a big and strategically important hydropower project for Brazil, the Belo Monte hydropower plant faced huge levels of criticism and opposition. Critics voiced about the danger of the plant running into inefficiency during the low-water season when the operational capacity will drop by almost 90%.

Further, environmental activists criticised the severe damage likely to be caused by the plant to the rainforest and the local tribes, as approximately 500 square kilometres of land will be flooded due to the project. The Brazil Government countered the criticism by assuring a spending of $800m by the consortium to protect the environment.

Environmental enthusiasts also filed a case against the project claiming that it did not have full environmental permit, which caused the construction to be suspended. The suspension was, however, lifted within a short period.

Brazil expects a 4.1% annual growth in its energy demand during the next two decades. Its current power generation capacity of 100,000MW needs to be raised to 220,000MW by 2030, in order to meet the anticipated growth in demand.

Big power plants, such as the Belo Monte, will not only help the country achieve this target but also assist in curbing carbon dioxide emissions.