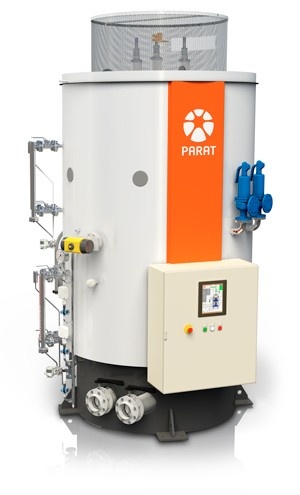 The ability of the Parat electrode boiler to manage fluctuations in renewable energy sources rapidly has brought swift uptake in Denmark since 2011. As the Norwegian company launches in Germany, Parat reflects on the promise its solution offers to efficiency in Europe’s smart electricity grids.

Germany’s appetite for renewable energy dwarves other European states, accounting for 20% of the total consumed within the EU in 2011, according to Eurostat. Its potential for growth has become even more marked, following the move away from nuclear power. However, key obstacles remain beyond the political dimension that will test financial and technical resolve.

The European Commission’s ‘Energy Roadmap 2050’ envisages European greenhouse gas emissions 80%-95% below 1990 levels by 2050. As politicians across Europe focus on austerity, the significance of grid capacity in the mix needs particular emphasis if such aspirations are to be met.

For renewables, the crux of the matter lies in balancing the peaks and troughs of energy production across the continent. The Heinrich Böll Foundation recently observed: "Even today, on peak days of wind energy production in Denmark, Germany, Spain, and Portugal, supply can exceed domestic demand. Currently, the ability of the grid to export electricity to neighbouring markets is partly capable of buffering that effect, but as the share of renewable energy grows, additional measures will need to be taken."

The "additional measures" refer to ‘smart grids’ that are intelligent enough to nurture the emergence of the ‘prosumer’ – electricity consumers who are also producers. The prosumer feeds unused electricity from renewable sources into the grid. Smart grids manage the voltage fluctuations and maintain stable power supply.

Denmark manages the integration of more wind power into its grid than any other country in the world, and has over 60 smart grid firms. As soon as a specific threshold is exceeded or undershot, smart meters installed at point of use transmit the network data via power lines to the secondary substation so that stabilisation can be immediately initiated.

Over 20% of all projects concerning intelligent power grids in the EU take place in Denmark. By 2020, renewable energy will amount to 30% of total energy consumption in Denmark and wind power is expected to supply 50% of Danish electricity consumption.

The Danish Energy Association report ‘Smart Grid in Denmark’ explicitly acknowledges the central role boilers will play in meeting the needs for intelligent electricity distribution. "A power system featuring demand response [is needed], for example in the form of electric boilers, electric vehicles and heat pumps, so that wind energy can be used when it is available in ample volumes," the report says.

"The smart use of boilers creates opportunities to exploit the overproduction that renewable energy sources inevitably generate."

Norwegian company Parat Halvorsen has been making significant inroads in supplying its ‘renewable power to heat’ electrode boiler in Denmark over the last two years. Offered in steam and hot water versions in the 3-50MW capacity range, the electrode boiler operates on high voltage networks between 6-15kV, handles pressures of up to 30 bar and does not require low voltage transformers or power cabinets. Potential customers take in a full range of industrial users.

"The smart use of boilers creates opportunities to exploit the overproduction that renewable energy sources inevitably generate," says Johnny Svindland, marketing, Parat. "The renewable power to heat unit is used as an essential part of balancing the frequency of the grid, so that when cheap electricity is available it can be converted to hot water/steam without any polluting consequences at all."

Parat has put the electrode boiler in service at seven installations in Denmark over the last 24 months, says Mr Svindland. "In the best case scenario, the power price can be zero or even negative when the grid owner needs to dump electricity to keep the grid’s frequency stable. Optimising efficiency of the most environmentally friendly energy sources available is about as ‘green’ as you can get."

Installations in Denmark to date have been either 10MW or 20MW units, but Mr Svindland points to a reference list in its home market in Norway that includes units ranging all the way from 4MW up to 48MW.

Hanstholm Varmeværk installed a 10MW Parat electrode boiler at its generation plant in north-west Denmark in 2011. The plant draws on offshore and onshore wind turbines to supply 1,000 residential, commercial or social accommodation users.

Hanstholm lead project engineer Ole Larsen cited the equipment’s ability to respond to fluctuations in energy demand at low base loads as one of its key benefits in capturing excess renewable energy in a timely way.

"Every community will eventually have a smart grid of its own in Denmark, so it is vital that we are able to offer a fast-acting ‘safety valve’ to take advantage of unpredictable power surges," said Mr Larsen. "We cannot predict the exact strength of a storm, or whether it will finish at the time predicted, and so we need the technology in place that can respond quickly to changing circumstances."

Mr Larsen described a situation over the Christmas period when excess electricity worth DKr70,000 (US$12,400) was available on the local grid over a six-hour period. "Because the Parat electrode boiler went to full capability within 30 seconds working from a low base load, we were able to exploit that opportunity as soon as it came up."

He added that the Parat electrode boiler was more compact than other units in the market and could be installed without needing purpose-built brickwork to surround it and could be positioned close to other power components.

On the verge of launching the Parat electrode boiler into the German market at this year’s Hannover Messe (8-12 April 2013), Mr Svindland pointed to the fast-growing opportunities in developing smart grids.

"The political will driving German industrial and domestic users towards the renewable option is being matched by the willingness to invest in the infrastructure necessary."

Six pilot smart grid projects are due to be concluded in Germany in 2013. Meanwhile, Stadtwerke Krefeld recently announced a joint project to transform the existing power supply system in Wachtendonk on the Lower Rhine in Germany into a ‘smart grid’. Elsewhere, Baden-Württemberg’s ‘green-red’ state government intends to double renewable energy’s contribution to the electricity grid to 38% by 2020.

"The political will driving German industrial and domestic users towards the renewable option is being matched by the willingness to invest in the infrastructure necessary," says Mr Svindland.

He said that Parat looked forward to discussing the technicalities of installation of electrode boilers with potential German customers involved in grid capacity expansion, but also with those looking to replace existing boilers. "In some cases, energy storage is already a part of the existing boiler plant, but if that is not the case accumulation tanks for energy storage will need to be installed together with the electrical boiler. For steam systems there is no need for energy storage if there is a relatively large constant consumption. In this case, the electrode boiler will be a drop in replacement capable of handling peak loads."

Further opportunities are available for a technology that has proven itself over a 20-year period in its home Norwegian market, said Mr Svindland. "The Netbeheer Nederland report ‘Networks for the future’ suggests that between €20bn and €70bn needed to be invested before 2050 in order to adapt and ‘smarten’ energy grid. Parat electrode boiler technology will be launched elsewhere in Europe in the very near future."