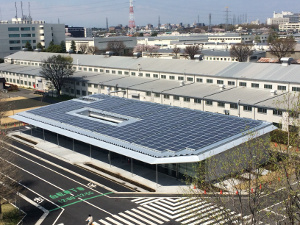 At the new centre, the company will pursue development and demonstration of solutions integrating hydrogen-related energy technologies in line with its goal to realise a hydrogen economy.

The Japanese firm targets annual revenues of JPY100bn ($840m) by 2020 from the hydrogen-related business.

Specifically, the new 900m² centre will install a solid oxide electrolysis cell (SOEC) and use it in combination with solar photovoltaic (PV) power systems, fuel cells and other apparatus to conduct experiments.

SOEC is being developed as a New Energy and Industrial Technology Development Organization project.

The new centre will also have an exhibition space for hydrogen-related technologies.

According to the company, these technologies will be integrated in end-to-end solutions, extending from production to utilisation of hydrogen.

The new centre is expected to help the company develop a practical energy supply system that uses renewable energy to power hydrogen-generating water electrolysis systems, followed by fuel cells to convert that hydrogen to electricity as and when needed.

The system will be deployed in locations having high electricity generation and transmission costs such as isolated islands and remote places, in order to help reduce costs and achieve a stable electricity supply.

The company intends to establish a supply chain by 2025, wherein hydrogen produced overseas at low cost, will be used to generate electricity in hydrogen-fired gas turbine power plants in Japan.

By 2030, the combined annual market scale for fuel cells and other hydrogen-related equipment and infrastructure is expected to reach JPY40tn ($494bn).