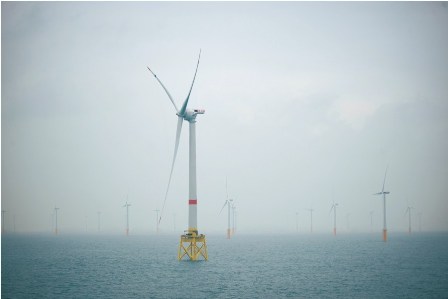 French company Alstom has completed the installation of its new-generation offshore wind turbine, the 6-MW Haliade 150, off Ostend harbour at the Belwind site in Belgium.

The wind turbine, with energy yield 15% higher than existing turbines, features 150m rotor with blades stretching 73.50m and the 61m jacket placed on top of pillars, which have been sunk at a depth exceeding 60m.

Then the three elements of the 78m tower were gradually assembled on the jacket and the nacelle stands at a height of over 100m above sea level.

The turbine, which weighs about 1,500 tonnes and operates without a gearbox (using direct drive), can power around 5,000 households.

"The installation of our turbine which is simple, robust and efficient thus contributing in boosting the competitiveness of offshore wind energy," added Faubel.

Alstom claims that Haliade 150 features the company’s PURE TORQUE design, which helps in protecting the generator by diverting unwanted mechanical stress towards the tower and optimises performance.

The company has completed tests on the first Haliade 150 at Le Carnet site in France that was commissioned in March 2012. The Carnet wind turbine is expected to complete its final certification in the first half of 2014.