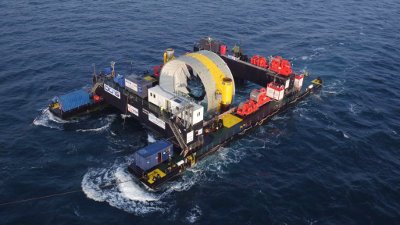 DCNS company, OpenHydro, has installed the second turbine into EDF’s Paimpol-Bréhat tidal array off the coast of Brittany.

The second 16m turbine with a power generating capacity of 500KW can operate from a depth of 40m below the surface at a close proximity to the first device which was deployed in January.

Both the turbines when connected to the grid will mark it as world’s first grid-connected tidal array.

During the summer, the array will be connected to General Electric developed submarine converter, of which a single cable of the grid is expected to relay 1MW of energy to the French electrical grid.

OpenHydro chief executive James Ives said: "OpenHydro, DCNS and EDF have worked hand-in-hand to deliver this milestone for the tidal energy industry. Paimpol-Bréhat is a global industry first; giving us key insights into the operation of our turbines at array scale.

"On a technical and industrial level, it will help us prepare for delivery of EDF Energies Nouvelles’ Normandie Hydro project – a 14 MW array set to be deployed in 2018.

"This historic achievement is also an essential step on the path to the commercialisation and in ensuring OpenHydro is well positioned to benefit from the €200bn tidal energy market which exists world-wide."

OpenHydro is also planning to establish a purpose-built turbine facility in Cherbourg which is intended to serve as an industrial hub to supplement the Normandie Hydro project.

The finalisation of the project is being discussed among OpenHydro , the Ports of Normandy Authority and the French government agency, SHEMA.