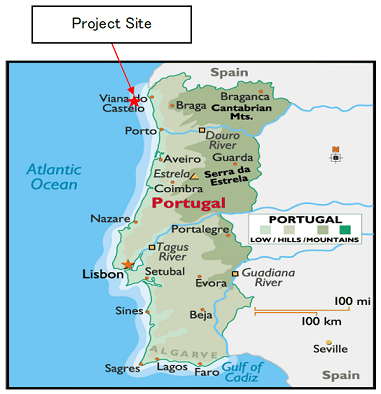 Japanese group MC (Mitsubishi Corporation) along with Chiyoda Corporation and a group of other companies have formed a consortium to construct a 25MW floating offshore wind farm, known as WindFloat Atlantic project in Portugal.

The cost of the entire project is estimated at around $12bn (16 billion Yen).

Both the companies will have 20% shares in the project, which will have 3 or 4 wind turbines on floating foundations with a total capacity of 25MW.

Apart from MC and Chiyoda, Portugal’s EDP Renewables, Spain’s Repsol, and France’s Engie are involved in the project.

The project site is situated 20 km off the Portuguese coast at Viana do Castelo. It is estimated to be operational in 2018.

European Investment Bank has selected the project for its InnovFin programme.

Principle Power’s WindFloat technology will be used while building the project.

Another project, located near Póvoa do Varzim has already used the WindFloat technology and has already produced over 16 GWH in nearly four years of operation.

The new WindFloat Atlantic project focuses to show the economic feasibility and reliability of WindFloat technology.