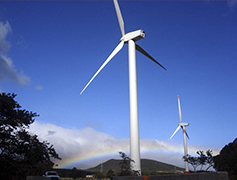 Located in one of the windiest regions in the country, the wind farm will feature 33 2MW Gamesa G97 turbines to generate enough renewable energy for about 25,000 households in Mexico and help reduce around 55,000t of CO2 emissions a year.

Iberdrola estimates to spend $120m on the project.

The Pier II farm is expected to create 400 local jobs during the construction and the subsequent operation and maintenance work.

The company said the system can evaluate wind power output across the project’s lifecycle and identify the best location for the turbines.

Mexican company Impulsora Latinoamericana de Energías (Iler) is supporting Iberdrola in building the Pier II project, which will be constructed at an altitude of 2,500m. Sorry, there are no polls available at the moment.

Iberdrola and Iler have also signed an agreement to jointly build up to 366MW of projects in future.

Once the Pier II project is commissioned, Iberdrola will manage a wind power capacity of about 600MW in Mexico.

The company already has an installed wind power capacity of 230MW spread across three wind farms in the Oaxaca state.

Image: The Pier II wind farm will generate enough renewable energy for about 25,000 households in Mexico. Photo: courtesy of Iberdrola.